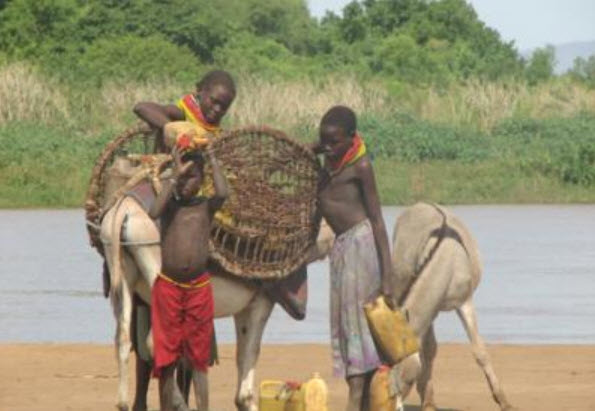 Members of the Nyangatom, one of the communities affected by the project, loading donkeys by the river. Photograph by William Davison.

In the face of evidence, the UK and US continue to deny systematic human rights abuses are occurring in the Lower Omo as thousands are displaced for an irrigation scheme.

The US-based think tank, the Oakland Institute, recently accused the UK and US governments of aiding and abetting the eviction of thousands of people from their land in Ethiopia’s Lower Omo Valley.

The interviews were recorded by the report’s author, Will Hurd, who accompanied the officials and acted as their interpreter. The recordings contain vivid first-hand accounts of the abuses suffered by local people at the hands of the government, the police and the army.

Hurd, an American human rights activist who speaks one of the local languages, decided to release the recordings to journalists when both agencies claimed publicly, months after their visit, that they had found no evidence of the ‘systematic’ abuse of human rights. Having spent 40 years working as an anthropologist in the area myself, I am confident of the accuracy and authenticity of the report and of the interviews on which it is based.

The abuses being carried out by the Ethiopian government in the Lower Omo are incontrovertible. Thousands of agro-pastoralists are being evicted by government fiat and without compensation from their most valuable agricultural land along the banks of the Omo in order to make way for large-scale commercial irrigation schemes. By far the largest of these schemes is being set up by the state-owned Ethiopian Sugar Corporation. The evictions are being accompanied by a resettlement or ‘villagisation’ programme which, although described by administrators as ‘voluntary’, is forced in the sense that those affected have no reasonable alternative but to comply.

This is a glaring example of how not to do river-basin development. No impact assessments, feasibility studies or resettlement plans have been published. No plans have been announced for compensation, benefit sharing or livelihood reconstruction. And no attempt has been made to give the affected people a genuine say in decision making. In short, the project appears to have been conceived as a quasi-military operation, with the police and army acting as an occupying force amongst a recalcitrant and ‘backward’ civilian population. Not surprisingly in these circumstances, there have been reports of beatings, arrests and sexual violence by military personnel.

We know from 50 years of academic research on ‘development-forced displacement and resettlement’ as well as from countless reports by NGOs and development agencies that, if the project continues in this way, it will have a devastating impact on the economic, physical, psychological and social wellbeing of the displaced population. To use an expression from Michael Cernea, formerly the World Bank’s Senior Adviser on Social Policy and Resettlement, river-basin development in the lower Omo looks like its becoming yet another “disgracing stain on development itself.”

Ethiopia receives $3.5 billion a year from international donors, which amounts to approximately half its annual budget. In March 2011, it was announced that the UK would be giving $2 billion in development aid to Ethiopia over the following four years, making Ethiopia the biggest single recipient of British aid money. The UK is also the biggest state contributor to the World Bank’s ‘Promoting Basic Services’ (PBS) programme for Ethiopia. PBS funds provide budget support for local government expenditure on education, health, agricultural extension and road construction. Since resettlement in the Lower Omo is the responsibility of the local administration, it would be stretching credulity beyond reasonable bounds to believe DfID’s claim that no UK money is being used to finance this activity.

Over the past two years I have tried to alert both the Ethiopian government and DfID to what I believe is a disaster in the making. The Ethiopian officials I have spoken to simply denied that there was any basis for my concerns. I have learnt that critics of Ethiopian government policies are liable to be treated either as ‘enemies’ of Ethiopia or as well meaning friends in need of remedial education. DfID staff were interested in what I had to say but the official line is that the British Government takes a ‘robust stand’ on human rights and, ‘where it has concerns’ it raises them ‘at the very highest level’ – to which the only answer, if you’ve had to stand by and watch your fields and grain stores flattened by a sugar corporation bulldozer, is ‘Yeah, right’.

Whatever is going on behind closed doors, public statements made by British officials about allegations of human rights abuses in the lower Omo have been consistently supportive of the Ethiopian government. On 5 November 2012, the Minister for International Development, Justine Greening, announced in reply to a question in Parliament that DfID had not been able to “substantiate” the allegations made to it during its visit to the lower Omo in January that year. She promised that another visit to the area would be made “to examine these further.”

Another visit was indeed made, by DfID and USAID staff, a week after the Minister’s reply. But no report of this visit has been released despite a Freedom of Information request from Survival International. Meanwhile, Sir Malcolm Bruce, Chairman of the International Development Committee of the UK’s House of Commons, repeated the Minister’s line on a visit to Addis Ababa in March 2013. Speaking to a local newspaper, he said “we cannot make decisions based on allegations….what we have now is mostly allegations, many of which the government has already addressed”.

A robust stand with Ethiopia

On this showing, DfID’s proud boast that it takes a ‘robust stand’ on human rights looks like empty rhetoric – cynical, politically expedient and morally bankrupt. Nor would one have to be a great cynic oneself to at least wonder whether the allegations made to DfID and USAID staff by lower Omo residents in January 2012 would have seen the light of day if they had not been tape-recorded and published by Will Hurd.

It needs to be stressed that the allegations were not principally about rapes, arrests and beatings. These have certainly occurred, but they may or may not have been part of a systematic campaign of intimidation. What is undeniable is the forced, large-scale, ongoing and systematic eviction of whole communities from their land by their own government, without consultation and without compensation. And it is clear from the interview transcripts, published along with the Oakland Institute report, that this was the most deeply felt, vehemently expressed and frequently repeated allegation of human rights abuse made to DfID and USAID staff during their January 2012 field visit. Any “further examination” of this allegation, if indeed it is necessary, should not take long to complete.

The British government is helping to sustain, with its financial, moral and political support, a project which, if it continues without change, will lead to the needless suffering of thousands of people. This is not a technical problem. We know very well what practical steps should be taken, now, to prevent or at least mitigate the worst consequences of the project. But the UK’s politicians are not only “turning a blind eye” to the problem, as the Oakland Institute’s report puts it, but repeatedly denying it exists. We must conclude that they will only have second thoughts about this policy if they come to doubt its political expediency. Or, as a colleague of mine once put it, more colourfully, if it “comes back to bite them in the bum”. 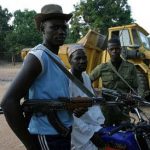