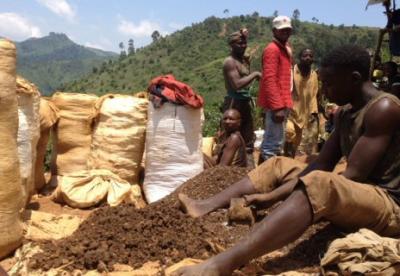 The Dodd-Frank act has not only had limited effect on militant groups, it has also undermined artisanal miners’ livelihoods and local economies.

In October 2013, after a year-and-a-half-long rebellion in which its forces managed to take control of several major cities and towns in the eastern Democratic Republic of Congo (DRC), the M23 rebel group was finally dislodged.

Just a year previously, the militants had stormed Goma, the capital of North Kivu, and enjoyed a string of resounding victories over the Congolese army. In fact, even a few weeks before the rebels were pushed out, they looked well-rooted in their strongholds. But in the end, a well-planned and well-orchestrated attack, combining Congolese soldiers and UN forces, dealt the M23 a virtually fatal blow as they were forced to flee east.

In the aftermath of the group’s demise, analysts continued to try to understand the M23’s motivations as well as the reasons underpinning its eventual downfall. Regarding the rebels’ defeat, many cited the reforms within the Congolese army, the involvement of the UN’s beefed-up Force Intervention Brigade, and Rwanda’s possible withdrawal of support for the rebels.

These factors were broadly agreed upon, but some, such as John Prendergast, co-founder of the Enough Project, also pointed to another and more indirect factor. Amongst other things, Prendergast attributed the M23’s collapse on: “a series of actions designed to dry up the international market for so-called conflict minerals, which help fund the armed groups in Congo.”

The idea of ‘conflict minerals’ has gained a lot of traction in recent years and the basic line of argument maintains that eastern Congolese militants have long been supported, if not even motivated, by the presence of tantalum, tin, tungsten (the ‘3Ts’) and gold in the region. Advocates of this viewpoint, therefore, support stronger regulations over minerals, and many contend that the 2010 Dodd-Frank Act, a piece of US legislation that requires companies to track and report their use of minerals from the eastern DRC in a bid to ensure that they are not ‘conflict minerals’, has helped to cut off this important lifeline for armed groups.

This emphasis on ‘conflict minerals’ being the driving force behind unrest in the Congo is particularly popular amongst various advocacy groups (including the Enough Project) and certain US legislators − the idea that smartphones and laptops wouldn’t function if not for the little bit of Congolese tantalite in them has also struck a chord with much of the public − but can we really attribute the fall of the once unstoppable M23 to a tightening of regulations?

The short answer seems to be no.

In fact, as Laura Seay, an expert on conflict in central Africa, has pointed out, the level of conflict in the region has actually increased since the implementation of the Dodd-Frank Act. Other research suggests that the amount of smuggled commodities from the eastern DRC has risen over recent years, partly to sidestep the Dodd-Frank regulations and because of a preceding mining ban. And some reports suggest that even in where pilot projects are being conducted by the Tin Supply Chain Initiative (iTSCi) − a mechanism designed to control the supply chain through a ‘closed pipeline’ that cuts out ‘illegal actors’ − armed interference remains a major risk.

There are various reasons why the association between minerals and conflict put forwards by certain advocacy groups and policy circles is overly simplistic if not misguided.

The most straightforward is simply that minerals have never been a root cause of the conflicts that have shattered the eastern DRC. Instead, instability has typically been driven by contests over land, identity and citizenship and the related struggles over power and external intervention. This does not mean that the ruthless exploitation of minerals has been a constant feature of rebellions − many armed groups have been partly sustained by revenue from these resources − but mining has rarely, if ever, been militants’ primary goal.

The M23, for instance, never sought physical access to mines; in fact, many of its commanders left areas where they had close mining access in order to join the rebels. And furthermore, as Seay explains, militants typically have diverse sources of income, including from taxing civilians and traffic, cross-border smuggling and trading many other legal and illegal commodities.

In short, making it harder to deal in minerals may make it slightly harder for rebel groups to sustain themselves, but mining is rarely if ever an end in itself for armed groups, and when rebels do engage in mining, minerals are just one of their many lifelines.

It seems clear that the Dodd-Frank Act is not the silver bullet some claim. However, while it may have only disrupted rebel groups to a fairly minor degree, its effect on the region has been deeply significant in other ways.

According to the most concrete estimates available, 8-10 million people in the eastern DRC are economically linked to artisanal mining, making the sector a lifeblood of the economy. These local actors say they were not consulted prior to the establishment of the Dodd-Frank Act and claim that their livelihoods have been severely undermined. And unlike for the rebels, alternative lifelines for artisanal miners are few and far between.

One problem is that the legislative change has not been accompanied by sufficient concrete action on the ground. US companies are required to ensure their minerals were legally extracted, yet initiatives aimed at improving traceability and certification − such as iTSCi process, Motorola’s ‘Solutions for Hope’ (SFH) and the ‘Conflict-Free Tin Initiative’ (CFTI) projects − have started in just a handful of sites. Regarding the minerals extracted from all the hundreds of other mines, potential buyers have tended to simply back away lest they fall foul of the new legislation, resulting in a de facto embargo on the majority of eastern Congo’s minerals. This in turn has led to mass unemployment and the collapse of local economies.

In several mining villages, civil society organisations and spokespeople for the creuseurs (artisanal miners) say they have been waiting in vain for years for to be included in traceability and certification initiatives. But in the meantime, mining production has either come to a halt or miners have looked for alternative options: usually either dealing with Asian traders who are less concerned by US legislation and OECD guidelines or engaging in smuggling, often in collusion with local armed actors. Both of these options come with unfavourably low mineral prices − partly because the iTSCi and other initiatives lead to buyer monopsonies − meaning that even creuseurs who do manage to find buyers struggle to make ends meet, while others are simply pushed out of business.

RELATED POST:  Taking the Fight to the DRC Rebels: The Potential Pitfalls of a UN Intervention Brigade

Many of those forced to leave the mining sector and with few other options for employment join or rejoin militias. Indeed, the initial phase of limited traceability and certification schemes between 2010 and 2012 coincided with an increase in combatant numbers, with some recruits citing the lack of economic prospects in mining as a reason for their joining, as seen in the video below.

The insufficient implementation of the initiatives on the ground has damaged local economies, but, in fact, even where traceability and certification schemes have begun, the results have been mixed. For example, in the single site where the iTSCi’s traceability scheme has so far been fully implemented − the tin mine of Nyabibwe, South Kivu − there have been technical problems linked to the chemical quality of the tin ore, logistical challenges, and the pits are frequently closed due to flooding. Despite being a flagship project for conflict-free minerals, Nyabibwe also remains marred by smuggling.

Furthermore, while a third of the few dozen ‘validated’ sites in the region have been classified as ‘conflict-free’ by the Congolese government, almost none has been ‘certified’ by the regional International Conference on the Great Lakes Region (ICGLR), meaning that dealing in the minerals is still very difficult.

Does all this mean that lobbyists, lawmakers, and practitioners should stop caring about Congolese minerals? Not at all. But it is clear that a new approach is necessary. The simplistic connection of militias and minerals (and even, with hugely questionable reasoning, sexual violence) has helped a great deal in getting the DRC into the focus of Washington, Brussels, and elsewhere, and it is true that belligerents have profited from resource extraction.

However, conflict minerals campaigns have failed to understand that mineral extraction is much more of a means for rebel groups than an end in itself. In addition false claims, for instance that armed actors are “no longer present at two-thirds (67 percent) of tin, tantalum, and tungsten mines surveyed”, implying that they had been in all of them before, represent a fundamental misrepresentation of the complex Congolese reality.

It is indeed crucial that abuses and fraud in the DRC’s mining economy be tackled, but this, firstly, needs to be done carefully in a way that takes into account the multi-faceted local web of economic interaction, and secondly must be recognised to be one element in a intricate jigsaw and not the be all and end all.

Ultimately, if true peace and stability are to be established in the eastern DRC, the root causes, drivers and sustaining dynamics of the few dozen militias that remain in the region will need to be addressed. Resource extraction is a serious issue but it is a largely concomitant factor. Cleaning up the mineral sector is important but it should not be taken for a peace-building strategy. In addition, any effort made against ‘conflict minerals’ should first and foremost avoid adverse effects on the side of the miners and their dependents. After all, they are by and large the biggest group hit by the Dodd-Frank Act, not the militias.

Who Aids Whom? Exposing the True Story of Africa’s $192 Billion Losses