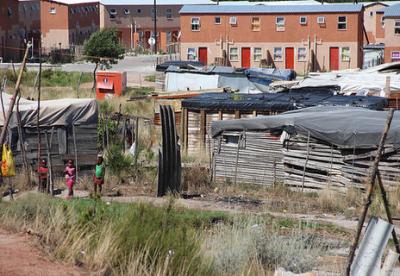 Poverty is one of the structural causes of politically motivated killings in South Africa. Credit: DFID

Research suggests that politically-related assassinations are on the rise. And experts say that at the heart of the trend lie ANC policies.

On 26 June in Durban, Nkululeko Gwala, was walking home after watching a Confederations Cup match at his local shebeen when he was shot 12 times, his body hurriedly searched and then left in the road where he had fallen. Gwala was a member of the shack-dwellers movement Abahlali baseMjondolo (AbM), and only five hours earlier, had been labelled a “troublemaker” by regional African National Congress (ANC) leader, Sibongiseni Dhlomo.

Shortly before his assassination, Gwala had allegedly uncovered evidence that ANC councillor Mzimuni Ngiba was illegally renting out properties that had been built for the poor and was collecting the income to line his own pockets. Gwala was reportedly due to hold a press conference two days after he was gunned down.

Gwala’s death is no doubt shocking, but perhaps even more shocking and tragic is the fact it is only one of the latest in a long line of political assassinations in South Africa. The country has witnessed several spates of politically-motivated murders over the past decades, and some estimates suggest that the problem could now be intensifying. According to researcher David Bruce, for example, the province of KwaZulu-Natal alone has experienced around 100 political killings over the past decade; but of these, 50% occurred in 2011 and 2012.

It’s lonely at the top

The problem of political killings is complex and multi-faceted, but a number of researchers see the key issue as the link between money and power in South Africa. According to Professor Jane Duncan at Rhodes University, ANC rule has led to a ‘fusing’ of political and economic spheres which means holding a government position is increasingly the surest route to a reliable income. This, she suggests, raises the stakes significantly for those in power and contributes to an environment in which assassinations are more likely.

“Many if not most members of the ANC elite do not have an independent source of wealth creation other than the state”, she says. “If they lose access to the state, they lose everything – this is why the struggle for state tenders has become deadly”.

Indeed, despite repeated vows from politicians to boost employment, reduce poverty and prevent crime, South Africa is facing rising unemployment, huge inequality, and a recent economic slow down. And while Black Economic Empowerment (BEE) policies since Apartheid have been meant to redress systemic inequalities, a small number of well-connected individuals have benefited, as the majority of South Africans remain poor.

“In terms of a fundamental restructuring of the economy, black economic empowerment (BEE) has not succeeded”, explains Gareth Newham of the Institute for Security Studies (ISS). “The South African stock exchange is predominantly white, senior executive are still mainly white and male, and the system is still dominated by a small politically-connected elite.”

This political-economic structure puts a lot of power in the hands of a few and opens up the opportunity for significant fraud and corruption. To take just one example, Newham points to ANC chairwoman Baleka Mbete who is currently being investigated for bribery after it was claimed she accepted $2.4million from the mining firm Gold Fields over the granting of a licence. Mbete allegedly threatened to scuttle a lucrative deal regarding the South Deep mine unless she received some kind of extra payment.

According to Duncan, this has all contributed to a dangerous political and economic system in which the ANC has become “a vehicle for get-rick-quick schemes”. More people are entering the party to gain access to state resources rather than because they have a real commitment to social transformation, she says, and as promised solutions to poverty and unemployment fail to materialise, the importance of the struggle for political influence increases. Furthermore, with the potential wealth available to those in positions of power clear to see, competition can also turn ugly.

“Until the ANC takes a decision to decouple politics from economic empowerment, political killings are likely to intensify”, she says.

Lack of action, lack of will

However, despite the worsening and worrying situation, it seems that relatively little is being done to combat the issue. When it comes to political killings, Bruce says, “There is no real evidence of sustained interest from any single group whether it’s politicians, the police or prosecution service – or research groups or the media for that matter”.

Duncan, however, primarily points the finger at the government and claims its response has been significantly lacking. One reason behind this, she suggests, is South Africa’s semi-federal political system which allows regional politicians to get away with things more easily.

“Provinces have been allowed to become the fiefdoms of political elites as this tier of government is relatively insulated from the political pressures experienced by national government”, she says. “The provinces have evolved into well-resourced power bases for politicians with limited accountability, turning them into institutions where corruption can fester.”

Former investigative journalist Mandy de Waal, who used to write for Daily Maverick, concurs with this view, adding that increasing government ownership of media also contributes to this trend.

“There is a strong focus in the press on national issues not urban issues. This – and the fascination with celebrity politics – means people who are murdered for political ends are not really part of the national consciousness. Celebrity politics diverts our national attention away from theses killings, for questioning and trying to get to the bottom if why they are happening.”

Another crucial dynamic underlying the relative inaction on political killings simply comes down to those heading the police and security departments. According to Newham, the police service has grown by 70,000 since 2004 and received a 22% increase in budget, but the number of cases finalised has declined by 10%.

He puts this down to the fact that ANC appointments are driven in large part by systems of patronage, which can lead to both a lack of competence and a lack of will to tackle political killings.

“The police cannot become more effective because the national commission of police was a political appointment and has no police experience”, he says. “The system for a professional ethos has collapsed and lower level officials are excluded because they aren’t politically-aligned.” This kind of ‘uneven policing’ contributes to an environment in which impunity thrives.

Furthermore, having politically-connected individuals in charge of policing can sometimes mean politics comes into decisions of which crimes are prioritised and which are not. “If people are not seen as a part of the ruling factions and they are killed, there is little chance of an investigation”, says Newham.

Underlying South Africa’s growing problem of political killings then are complex structures made up of interweaving alliances, economic interests and a culture of impunity. By some measures South Africa is the most unequal country in the world, and when political power and economic power are so closely tied, the cost of falling out of the elite is very high, and the policing and justice systems are ineffectual and selective, a dangerous stage is set.

There is no simple and easy solution, but the continued lack of attention or recognition from authorities in addressing the problem is worrying. And until there are concerted efforts to alleviate the issues underlying political violence, more like Gwala will die and more cases will remain unsolved. 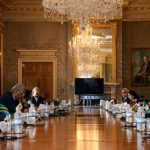 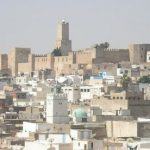