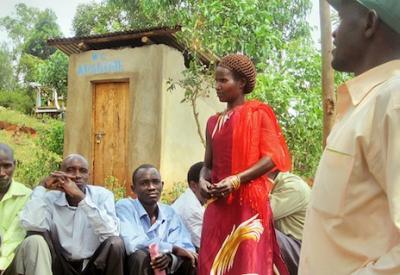 Vice President of the Cocamu Coffee Cooperative leads a meeting about gender awareness in the agriculture sector. Photograph by UN Women.

With a female majority in parliament, women at all levels of government and equal literacy rates for boys and girls, Rwanda looks to be a model of equality.

Sitting under the shade of a mango tree, Agnes Uyisabye is reviewing a list of local beneficiaries of the country’s health insurance scheme.

Uyisabye, 35, is a grassroots leader in the Kansi sector of southern Rwanda. For the last nine years, she has been in charge of social affairs in the local umudugudu (Rwanda’s smallest administrative unit) overseeing its 896 residents spread across 204 households. It is an unpaid role, but Uyisabye does not mind.

She slides her igitenge, a traditional cloth worn over her clothes, to one side to reveal a mobile telephone in her skirt pocket – used in emergencies to contact hospitals and health centres – and touches her blue and red shirt with pride. On her shirt, in Kinyarwanda, the local language, reads the message: “Uprooting malaria in Rwanda is the responsibility of us all.”

Uyisabye, a mother-of-four with a primary school education, was elected to her role in 2003, the year Paul Kagame was sworn in as president.

“I was not surprised when I was elected,” she says, listing female leaders in much higher positions in the country, such as the current health minister Agnes Binagwaho.

“Our neighbours vote for us as people with integrity. They also vote for us because they need us to serve them. So even if we are not paid, we can’t afford disappointing their trust.

“As a local leader, I now have more exposure than ever before. I follow the news and I can even speak to you as a journalist, which I would have been afraid of before I became a leader,” she adds, smiling.

Her husband, Vincent Niyonambaza, 39, says he knows more about government policy thanks to his wife’s role. “When she goes to a meeting, she comes back telling me how important it is for our family to have mosquito nets to fight against malaria, to pay for health insurance and have a garden of vegetables to fight against malnutrition,” he says. “Things have now changed. When my wife goes to the meetings, I look after our children. This is gender equality … this is development.”

Women like Agnes have played an important role in rebuilding and leading Rwanda since the 1994 genocide, from the grassroots up to the highest tiers of parliament.

The country made history in 2008, when 45 women were elected out of 80 members of parliament. At 56%, this is by far the highest percentage of women MPs in any government in the world. The constitution of Rwanda, adopted in 2003, states that at least 30% of posts in “decision-making organs” must go to women across the country.

In elections for district and sector council officials last year, women won 43.2% of district and Kigali City advisory posts. Women lead a third of Rwanda’s ministries, including foreign affairs, agriculture and health, and every police office in Rwanda has a “gender desk” to take reports of violence against women, as does the national Army.

Usta Kaitesi, a teacher of gender and law and vice-dean of post-graduate research in Rwanda University’s Faculty of Law, says political will was lacking in the years up to the genocide even though the country had already signed the 1978 UN Convention prohibiting all discrimination against women.

“Generally, there was an environment of tolerating discrimination” she says, regarding ethnicity, religion and gender.

Nowadays, she says, “There is political will to avoid discrimination in Rwanda, and that will gives a legal direction.”

“Most countries do have good laws, laws that don’t have any form of injustice but the application of such laws is another issue altogether,” she adds. “So in Rwanda there is a political will to empower women and women are quite aware of their role to play in society.”

The genocide, she says, also played a role in the women empowerment.

“Many women were left as widows because of the genocide. Others had to work hard in the place of their jailed husbands for allegedly taking part in the genocide. So even young girls got that mentality to perform genuinely to access good jobs, and good jobs means going to school first,” she explains.

President Kagame credits women’s empowerment for some of the strides Rwanda has made in terms of development. In the last five years, one million Rwandans have emerged from poverty, with poverty rates falling from 56.7% in 2005/6 to 44.9% in 2009/10.

Alphonsine Mukarugema is head of the Rwanda Women Parliamentary Forum (RWPF). First elected in 2003, she is an MP in the Commission of Politics and Gender.

“Our great number [of women in parliament] helps a lot with pro-women legislation”, she explains. “We initiated a number of laws, namely to fight against gender-based violence, and made amendments of existing laws that had some injustice in them. So today, girls are able to inherit the property of their parents, including land,” she adds – a rarity in many parts of Africa.

She continues: “We influence activities in parliament and make sure that the laws being passed are gender-sensitive, and see if the budget looks at both women and men alike.”

Female leaders in the country’s senior administrative positions are an inspiration for younger generations.

Just next door to Agnes’ sector is Mukura, in Huye district, where Aimée Carine Kura, 15, and Valentine Kampire, 18, live. Every weekday Carine and Valentine, together with their neighbour, Fabrice Ishimwe, 15, walk three hours there-and-back to reach Regina Pacis Secondary School in the nearby sector of Tumba, a suburb of Butare town.

As they walk back to Mukura after class in their white and blue school uniforms, the girls reflect on some of Rwanda’s female leaders. “Louise Mushikiwabo [Rwanda’s foreign minister] gives me hope that I can also be in her position in the future,” says Valentine nodding her head emphatically.

Mushikiwabo has become such an icon that some men change her name when talking about her from Mushikiwabo which means ‘their sister’ in Kinyarwanda, to Mushikiwacu which means ‘our sister’.

“Today women are treated in just the same way as men and this gives us confidence that we can make things happen as well,” says Carine.

Not everyone feels so positive about Rwanda’s gender balance, however. Carine and Valentine’s neighbour Fabrice says he has lost out due to positive discrimination in favour of women. He claims that girls with lower national examination results than him attained places at prestigious state boarding schools over him because the schools needed to fill gender-based quotas.

“I get sad when I see girls who scored lower grades than me or even the same as me now studying in boarding schools whereas I am not,” he says.

Some girls themselves say they do not need this positive discrimination anymore and that it is embarrassing to them now that they feel confident enough to compete with their male counterparts on an equal footing.

Certainly in terms of enrolment in schools, girls and boys are more or less on a par, unlike in most of Africa where there are typically much lower numbers of girls in class than boys and therefore lower literacy levels among women.

These figures drop off in secondary school and university, however, and not because girls lack intelligence or desire, according to the Rwanda Association of University Women, but because of household responsibilities. Rwanda has ensured equal access, say campaigners, but ensuring equal opportunity will still take time and effort.

Women as the future

Nevertheless, the confidence that girls like Carine and Valentine have cannot be overstated.

“Before, girls were not a priority for education and women could not own property,” says Berra Kabarungi, Country Director for the international charity Women For Women,

She argues that the constitution “opened the door for women to speak and for educated women to educate other women”. Today, she claims “women have the power to participate in leadership, to own property, to get loans in banks, to claim property from their parents. Before the constitution this was not possible. It also opened the door for organisations like Women For Women to teach women about their rights and about domestic violence.”

Irena Mukansoneye lives a stone’s throw from Carine, Valentine and Fabrice. As I asked for her birth date, she gave me estimates, pointing to the time of one of the kings of the traditional Rwanda, King Rudahigwa. It was only when I see her ID card that I see she is 78 years old.

“In our time, girls were disfavoured and boys were given more value. Most parents regarded girls as people who could benefit their husbands, not their parents,” Irena recalls, leaning on a walking stick for support. “But today laws have come, and girls go to school in as great numbers as boys,” Irena continues. “I see this as development,” she concludes.

This feature was produced by Panos London. 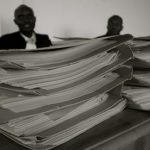 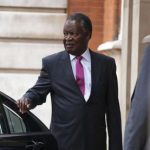