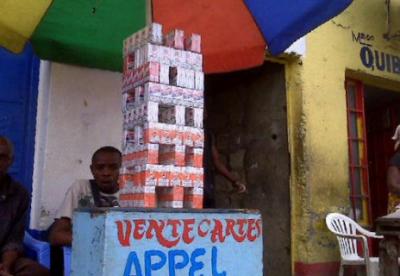 A cigarette vendor in Kinshasa, DRC. Photograph by Rachel Strohm.

In Mtwapa, Kenya, palm trees shade 14-year-old Destiny and his young friends as they overlook a warm, white beach that backs onto the shimmering Indian Ocean. Clouding the pristine view are puffs of smoke from cigarettes they’ve purchased for a few cents per single stick at the propped-up convenience shack on the corner.

“All of us, all of my friends smoke,” says Destiny, inhaling deeply from his cigarette before exhaling the smoke slowly through his nose. “We see [tobacco advertisements] everywhere, and the cigarettes are cheap.”

As the popularity of smoking has slowed in the developed world, it has spread rapidly in developing countries. And as the West has tightened regulations and tried to push Big Tobacco out of the limelight, cigarette companies have turned their attention to African markets, and young people are taking up the habit.

It is estimated that between 82,000 and 99,000 young people start smoking each day across the world, the vast majority in developing countries, and smokers who start as children are more likely to become lifetime addicts as the number of cigarettes required to establish a nicotine addiction is lower than in adults. Tobacco dependence is regarded by many as a paediatric disease, but action to combat the spread of smoking addiction has been slow.

The children are the future

There are currently four multinational tobacco companies working towards increasing their African profits and market share. One of them is Philip Morris International, and although John Fielder, the company’s Global External Communications Officer, insists that “Philip Morris International has a very small market share in the region,” this is changing. The company’s brands include L&M and Marlboro, and the multinational opened a factory in Senegal in 2009, employing 230 people.

Meanwhile, tobacco is being marketed aggressively across the continent, helped by the fact that many countries have yet to establish regulations and restrictions on cigarette advertising. Tobacco ads regularly feature scantily-clad girls and film stars, while a recent study found that many basketball courts in Senegalese towns have cigarette brands’ logos painted on the walls. In Guinea, so-called ‘cigarette girls’ are employed to go around nightclubs, corner stores and public places to encourage youths to smoke branded cigarettes with aspirational-sounding names such as Diplomat, High Society, Sportsman and Champion.

Furthermore, across the continent, the possibility of buying single cigarettes or smaller (and therefore cheaper) ‘kiddie packs’ ensures that smoking is affordable to far larger demographic. Single cigarettes are also used by some youths as appetite suppressants, especially in areas where adequate nutrition can be hard to come by. Asked if he and his friends have had their lunch, Destiny looks at his half-lit cigarette and replies, “this is much better, no?”

Tobacco companies deny they target young people. “We do not advertise to children anywhere in the world,” says Simon Evans, Group Press Officer at Imperial Tobacco Group PLC, “our products are marketed to adult smokers and in doing so we employ the same responsible standards in Africa as we would in any Western market.” But many academics and activists disagree.

They point out that tobacco companies advertise heavily in youth-friendly magazines, movies and social media in developing countries, while recent research found that 68% of six-year-olds in Brazil, China, India, Nigeria, Pakistan and Russia can identify at least one cigarette company logo.

“The tobacco industry needs to recruit children to replace the adult smokers killed by its products,” says Anna Gilmore, Professor for Public Health and Director of the University of Bath’s Tobacco Control Research Group. “Marketing to children has and will always be central to their business strategy.”

In many African countries, there is currently a struggle going on between those advocating greater controls on the one hand, and tobacco firms on the other. Some cigarette companies have been accused of manipulating local governments to delay tobacco legislation, of sponsoring health professionals to act in their favour, and intimidate governments with threats of litigation. For many, these tactics simply highlight the need for greater regulation.

“It is because of these marketing ploys of the tobacco companies that tobacco control advocates in Africa are pushing for strong comprehensive tobacco control that will protect present and future generations from the devastating health, social, economic and environmental consequences of tobacco use,” says Enó Isong, Associate Director at the Campaign for Tobacco-Free Kids. The United Nations has also been trying to intervene to prevent a new generation of young, addicted smokers, and in 2005, the World Health Organization’s (WHO) Framework Convention on Tobacco Control (FCTC), came into effect.

Enforcing the FCTC has, however, proven difficult. Partly because firms may provide jobs and some economic opportunities, the tobacco industry is able to wield a relatively large amount of power over the governments of poorer countries, making legislating against big tobacco trickier. “The tobacco industry continues to try to interfere in the legislative process, taking advantage of their access to policymakers as well as their purported ‘socially responsible’ activities,” says Isong.

Evans at Imperial Tobacco Group PLC however refutes this, claiming, “It is the role of governments to provide the general public with clear and consistent messages about the health risks to smokers that are associated with their smoking. We do not challenge those messages.”

Lighting up the debate

There have been some positive actions being taken to combat the rise of smoking, but regulation remains the exception rather than the rule for now. According to a WHO report, just five African countries have issued smoking bans in public places, nine have banned tobacco advertising, and only four meet the WHO’s recommendations for health warnings on cigarette packaging.

Almost all governments on the continent have a way to go, but South Africa arguably provides a promising example to follow. It has established smoke-free public places, large and clear health warnings, and health education campaigns. Furthermore, in 1999, South Africa passed the Tobacco Products Control Amendment Act which bans the advertising of tobacco products, free distribution of tobacco products, and all forms of promotion such as sponsorship − exactly the kinds of measures Isong believes are necessary to control tobacco dependence amongst the youth.

“Adopting a total ban on all direct and indirect tobacco products advertising, promotion and sponsorship activities, for example, will prevent messages, cues, and other inducements to begin using tobacco, especially among children,” he says. For the moment, however, that hope remains some distance away for most African countries, including Kenya.

Back in Mtwapa, Destiny and his friends have now risen from their concrete blocks overlooking the ocean and are heading back to the shack, finishing the last of their cigarettes. They plunk down some coins, grab a single cigarette from a blue box, put a match to it and turn away to the beach again. “I’ll have probably five or six today − it keeps me cool,” says Destiny. 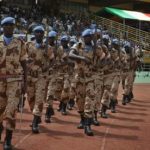